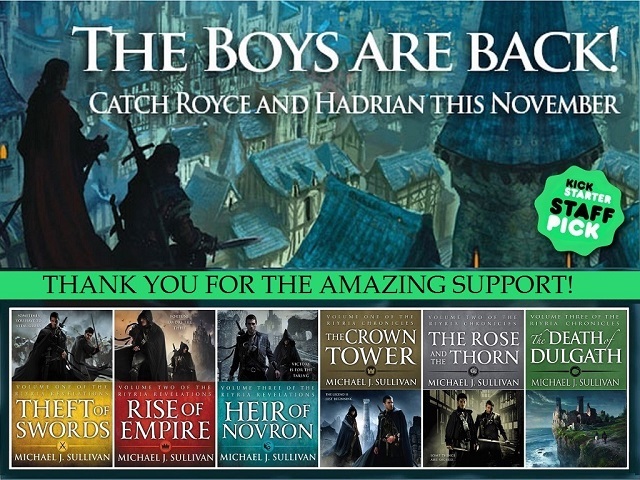 Pre-order for The Death of Dulgath by Michael J. Sullivan

Michael J. Sullivan's unlikely heroes, Royce and Hadrian, return in a classic fantasy for both Riyria veterans and first-time readers.

Latest Updates from Our Project:

Hey all, Michael here. Yeah, I know it's weird, huh. Robin has been doing so many updates as of late, but I just had to come in to tell you about a Kickstarter that a good friend of mine is running right now.  My hope is you'll take a look, and if you like what you see, you'll support the project. Something that I think will be good for both you and him.

I've known Dyrk for around two and a half years and he's stayed over at our cabin a few times. Also, every time I go to a convention that the two of us are at, I try to spend as much time with him as I can. Why? Dryk has a keen mind, a great sense of humor, and amazing writing acumen that makes any conversation with him worth savoring. And he's a really kind and helpful guy to fellow authors, so how can you not love that?

But enough about Dyrk, let me tell you about his books because they are well worth crowing about. The trilogy is called Paternus and these are their titles:

They are urban fantasy tales that can best be described as American Gods meets the Avengers. Dryk is running the  Kickstarter to produce hardcover copies of the first book in his series (something I've been wanting for a long time, so you know I backed the project right away).

So, when I started reading Dyrk's debut novel, my first thoughts were. "Wow this guy really knows how to draw you into a story, and his prose is smooth as silk and well polished." But I'm not the only author that sings Dyrk's praises. Here are some quotes from other authors I respect, and what they say about Paternus:

If you don't want to wait for the hardcover to get started, the first two books are out now, and they are enrolled in the Kindle Unlimited program so you can read them for free (or pick up a copy of each for under $5 -- such a deal!) And if you do, you can even get an early copy of the final book which will be released to the retail chain on May 19, 2020.

As you already know, I'm a huge proponent of Kickstarter, and I've been trying to nudge more authors to use this great platform. Robin has done some coaching with Dyrk, and I'm glad to see him diving in. The project is already funded (did so in just over  24 hours). Currently, he is just $790 away from five-figures, and I'm sure with your help he'll blow through that milestone. So, take a look, and if you like what you see, please join me in making this project an even bigger success.

I'm sure most of you already know about this (because I sent an email before the launch, and also had a project update) but not everyone sees everything, so I'm posting again. So, we launched the Age of Death Kickstarter a 7 days ago.And it' already surpassed this Kickstarter and may even past my previously most successful one (Age of Legend).

Oh, and a special note for our international backers. We listened to your shipping concerns and if we have a high enough volume, we will be shipping in Europe from a local fulfillment company. But even if we don't have enough orders, we have greatly reduced our profit margins for non-US orders and applied those savings to bring down the cost of getting books into the hands of people outside the United States. So, if you live outside the US and want  signed books, for the Legends of the First Empire you could save $20 to  $46.

I hope you'll join us!

Tomorrow at noon EST I'll be launching the Kickstarter for Age of Legend, the next book in my Legends of the First Empire series. If you want to take a look at the project (currently in preview state) You can find it here.

For those that don't know, The Legends of the first Empire are a six book series and Del Rey (a fantasy imprint of Penguin Random House) released the first three of these books. Previously, I had sold the audio rights for all the books books, and while Del Rey was disappointed they couldn't have the audio, they took the print and ebook and "called it good." Well, time passed and when it came time to sign the next three, I reminded them that the audiobook rights were gone and that put up a roadblock. Apparently PRH changed their corporate policy such that no new contracts could be signed unless they contained audio.

We went searching for other publishers but it was the same with all of the big-five. So we went to the largest non-big-five and while they were willing to do a deal without audio...in fact we were going to do print-only with them...there were other contract terms that were a problem (not to mention they wanted to keep the spacing between books at 1 year, and I wanted the last three to come out more quickly. Anyway...we eventually determined we weren't on the same page about many things publishing related, so now we're going to do the print books ourselves.

We want to make sure that they exactly match the previously released books so we are using the same printer, paper, cover stock, and even font. This Kickstarter will help raise funds for that printing.

If you've not started that series  yet, now would be a great time as I have a reward level that gets you signed hardcovers for all four books at a savings of $22.  That's about 20% off the cover price, and that includes Book #2 which is now out of print, but I purchased a bunch of the left over hardcovers.

In any case, I hope you check it out, and if it looks interesting, please consider backing it. There are a number of Early-bird specials which will get you 20% off of the ebooks or single hardcover reward levels.

COMING DOWN TO THE WIRE!! With just 9 hours left in the Age of Swords crowdfunding campaign (being run on Indiegogo - http://bit.ly/2P7enk3). We need just $787 to hit the 5th stretch goal so that all backers receive a Suri and Minna short story. Here are some of the other perks the Kickstarter provides:

It isn't on Kickstarter this time (because it's not for a new product), but you can find it here. What is it for? Well, I'm glad you asked. You see, hardcover editions of Age of Swords are now out of print, so the only place to get them are marketplace resellers, (who have jacked the price up to $89 - $191...even for used copies). What an outrage! Not only that, but I'll earn $0 on any sales of these copies.

Del Rey will sell me the excess warehouse stock, but it'll be expensive. So I'm running a crowdfunding campaign to raise the $11,360 to get my hands on as many copies as I can. I'll then sell the books on my site at the $28 list price (backers of the campaign will get the books even cheaper, just $22, which is a 20% discount). Plus people will receive added perks like screensavers of Marc Simonetti's fabulous artwork, a free short story, and their names will be listed on my website for helping to make this project happen.

Since you've supported my Riyria crowdfunding in the past, I thought you might be interested in jumping into Legends of the First Empire (the first three books are released now and all are available through the campaign).

So, take a look and if you like what you see, please consider backing this project, too. And as always thank you for your support.